Abacus is a simple device with a frame, wire and grooves, that can be used to crack complex arithmetic problems. Yes, you read it right!!

The Abacus is the oldest known method of counting, known to mankind. Interestingly, It is widely known that a standard Abacus kit can be used to perform addition, subtraction, multiplication and division. When used effectively, the Abacus kit can be used to extract Square root and Cubic roots. Currently, this ancient discovery is a tool of mathematical miracles these days.

Lets dive deep and get to know more details about the Amazing Abacus Kit.

In the meantime, how many of us know that an Abacus kit is typically referred as the Tallying frame? The Abacus is a highly versatile calculating device, invented by Ancient Chinese. But, firstly what does ABACUS stand for?

Above all, the Anatomy and construction of an Abacus Kit varies from place to place depending upon its make and users, the types of Abacus varies widely. Previously, the Romans, Chinese Japanese, East- Asians and Vietnamese had played quite a game of Arithmetic’s in the evolution of the Abacus. Be in its structure, design and its usage, the variation was tiny, yet profound.

Similarly, we have painted quite a picture about the various Types of Abacus Kits in our article.

We at Thej Academy, stick to the classics, as Old is gold, you see!

The abacus kit being one of the most widely used calculating device, we take pride in teaching it using the classic structured kit. It is indeed provided with 17 vertical rods with 5 beads on each of them. We teach using the basic Abacus Kit that has a flat rectangular frame with a centre dividing median. The bead arrangement moreover defines its usage as it has four beads at the bottom and one on the top.

The Abacus kit comes in varying types of hardwoods, eventually in differing sizes. The commercially and most commonly used abacus kit is the one shown in the picture below. Above all, understanding the abacus kit before venturing into abacus classes is highly important. While we at Thej Academy, have made it a mandate.

The Answering Bar or Reckoning Bar

Not to forget, use the index finger and the thumb to manipulate the beads .

Easy down kids!! With the basics of an abacus kit, reading numbers on it comes in super handy!

Fret not! We have got easy examples for your better understanding. (Of course, with self explanatory pictures- as always!!)

Furthermore, before we start any calculation in an abacus kit, it is important to set the kit to zero. This can be done by zipping the index finger along with the thumb along the reckoning bar. Clearly, this is done in order to make sure that there are no beads attached to the same. This is the preliminary step to begin with the actual calculation.

Should we learn something beforehand?

When there are no beads towards the reckoning bar, the value is undoubtedly zero. Lets begin with the earthly beads on the housing point. It is known that the place value of this column is one for the earthly beads and five for the heavenly beads. 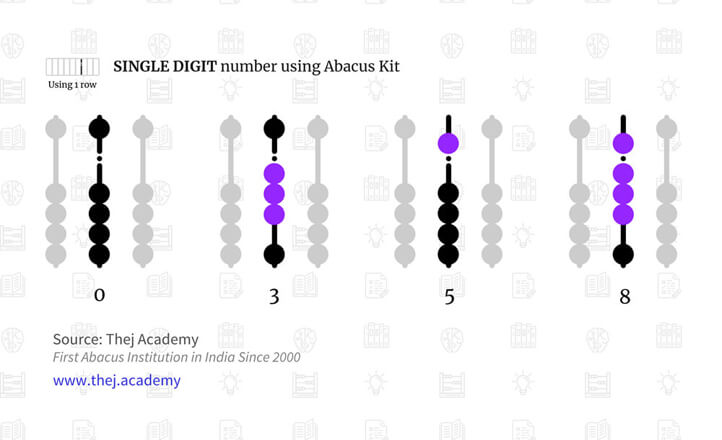 That is it !! Addition using an abacus kit is this simple!

In short, the first column to the left of the key point, refers to tens. Lets make use of the tens column to work on two digit numbers. 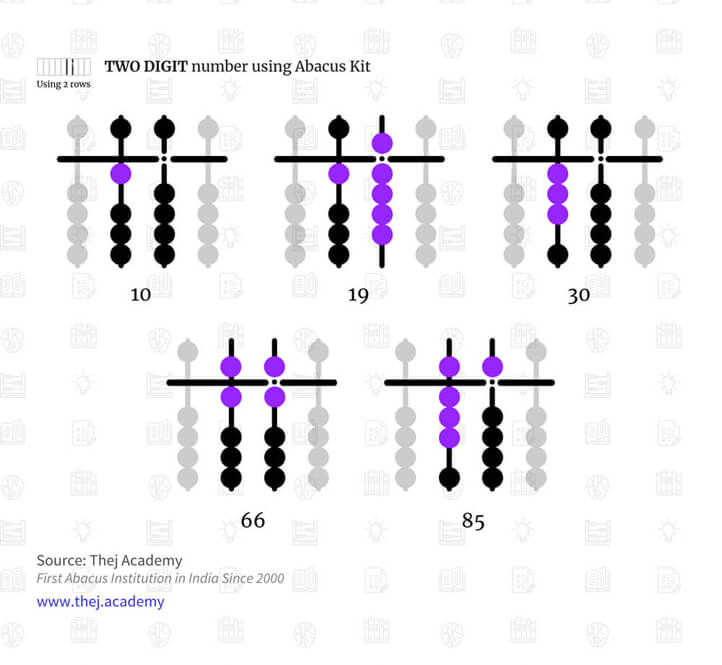 Dealing with three digits is indeed as easy as one and two digits in an abacus kit. The second column to the left of the key point stands for hundreds . Lets make use of the ones, tens and hundreds column to work on three digit numbers. 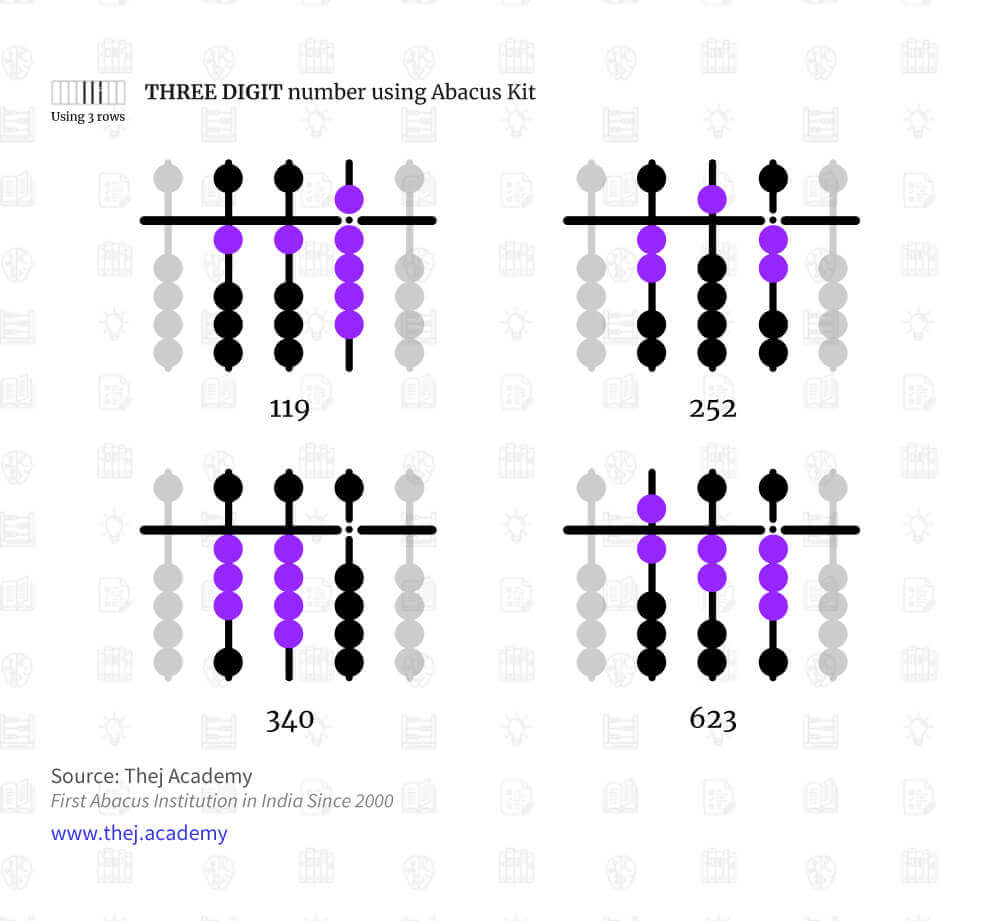 The similar method applies for subtraction as well. For example, pull off a bead to reduce a value from the total count. The abacus kit is literally a boon for children struggling to understand number values and basic arithmetic’s.

That is it ! Calculating three digit numbers have never been this easier indeed!

In this competitive world of improvised technology, the human brain is least used. Moreover, this highly impacts children and their innate skills. Learning abacus not only improves their memory power, but also fine tunes their focus. We at Thej academy, use the Abacus kit as a tool to sharpen kids minds. Thej Academy also believes in making math fun with a variety of inquisitive courses. Right from introducing the Abacus kit to solving complicated problems, Thej Academy makes sure that children are given individual care. On the other hand, it is scientifically proven that, with advanced abacus skills, solving multilevel arithmetic’s becomes easier. Not to mention, Abacus also contributes to progressive logical reasoning and problem solving skills. In conclusion, this can effectively be used to Sharpen the minds of children, leading to their successful future!

Sign up and stay up to date with the latest articles and news from Thej Academy. We respect your privacy. Your information is safe with us and no spams.